In the fall of 2012, I took a much needed voyage to Asia.  In my two months away, I spent one month volunteering at the Rinchen Parli Monastery teaching English to Buddhist Monks.  This experience alone I could write about for ages as it is one of the most unique and fulfilling experiences of my life.  Perhaps I was going through a bit of an “Eat, Pray, Love” phase having just gone through a major break-up, and the death of my mother.  Whatever the cause, I needed this push.

I really lucked out when it came to being placed at this monastery.  It was clean, had delicious food, hot water (sometimes), and it was safe (besides the rumor of the tiger who apparently roamed the mountain).   Rinchen Parli is situated at the top of a mountain in the Kathmandu Valley.  It was gorgeous. Behold the view from my bed… I woke up every morning above the clouds:

My days consisted of skipping breakfast (I decided not to have rice and vegetables at 7am and kept a supply of granola bars and instant coffee in my room) and preparing for my classes.  I had morning classes with the children in which I taught them basic English.  Here is my class working on a test I prepared.

Because of my American accent (who knew being American overseas would ever be a good thing), the monks wanted me to spend most of my time tutoring the adults.   Apparently they had lots of volunteers in the past that English wasn’t their first language and an American accent was a sought after thing (the only time that will likely happen!). I insisted on keeping one hour with the children because they where a joy and so eager to learn, but promised I would devote my afternoons to the grown ups.

Even the youngest monk would seek out time for some very important coloring assignments: 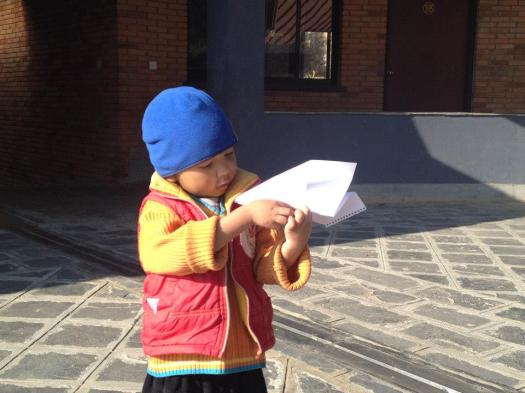 After lunch I would spend a few hours having one on one tutoring sessions with a few of the adult monks including the principle of the monastery, a teacher, a Tibetan refugee and an important Lama they stashed up in an amazing temple.  These monks all had a very good understanding of English and our time together mostly consisted of me making minor corrections over conversations about Buddhism, Tibet, Nepal and even Obama, iphones, and Michael Jackson.  With access to the internet and television the monks have windows into the world outside the monastery and it was often a pleasure to hear about their observations.

Read more about my time with these monks (here).