One of my first ‘big’ solo trips was to India and Nepal a few years ago.  My main intention was to go to Nepal, where I would be spending a month volunteering at a Buddhist Monastery.  I decided to add on a month in India beforehand to see some areas I had never been to before.  I decided I would make my way from Kolkata to Kathmandu by land.

I am not going to lie, I was a bit nervous in the days leading up to the trip.  I had traveled a good amount before but flying to Kolkata, India, by myself was a little different.  It didn’t help that prior to my trip I would repeatedly get such astonished reactions.  “You are going ALONE? Like, totally alone? You’d better be careful!” To which my internal response was… gee thanks for that solid advice, I’d never thought of being careful as a woman alone in India…or any country.  There were also the people who envied my trip offering words of encouragement, and this added to my excitement.  It was a little scary, but with common sense and caution I would be fine and it was going to be an amazing adventure. 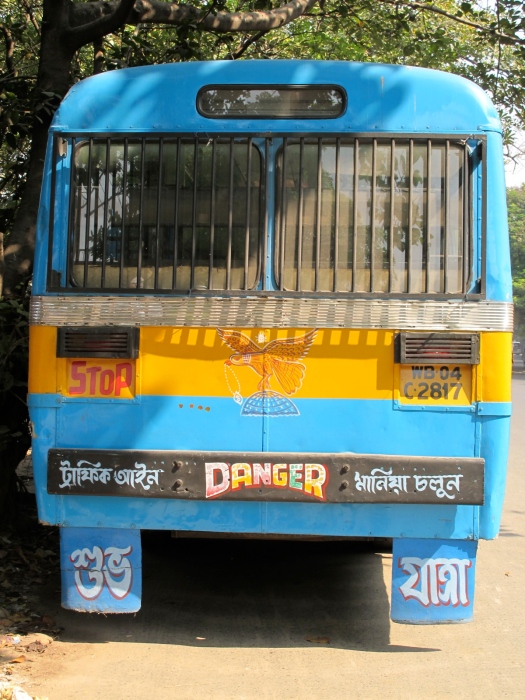 I had one friend (who has never left the U.S.) say “Oh, I could never do that.”  To which I was immediately turned off and directly replied, “why?”.  I never want to say “I could never do that” to anything.  What is it you can’t do?  Buy a ticket?  Get on a plane?  Do you think you will fall to pieces if you don’t understand the words on a menu or a sign?  Yikes!

Okay, maybe there are some trips that are not the smartest ideas… For example, I am not thinking of traveling to Syria any time soon, and while I hear North Korea is lovely this time of year my husband (and the U.S. government) have forbidden it.  But I still have a hard time relating to people who are afraid of places outside of their bubble. How could you not even have a curiosity about the rest of the world?

I digress.  So although I was a bit nervous, I had a seamless arrival into Kolkata.  Here’s a tip and a new rule I live by:  If you are flying into a place such a Kolkata (new to you, a third world country, not exactly known for their impeccable public transport), treat yourself to an amazing hotel the first night or two.  Allow yourself to have a nice transition into this new culture in luxury, and most important of all arrange an airport pick up! I splurged on two nights at the Oberoi which did not disappoint one bit.  I arrived into Kolkata at almost midnight, and I cannot say how happy I was in that insanity to see a woman holding a sign with my name on it.  In my air conditioned vehicle I had cold water and a wet towel (did I smell jasmine?).  All things that felt like the most important items in the universe after traveling for 30 hours into a city that was about 100 degrees at midnight.

After a solid night of sleep in my gorgeous room I was refreshed and energized to start my day.  I was especially excited for my first meal in India, a fancy hotel breakfast.  The initial thing I noticed was that there were hardly any women staying at the hotel, as it was primarily business men.  It didn’t really bother me at that point and it made sense that business men would stay at a place like the Oberoi when traveling.  I headed out after breakfast and decided to check out the Victoria Memorial.  It didn’t look very far on the map so rather than a taxi (which the front desk suggested) I opted for walking.

Once I left the gated walls of the hotel I immediately was reminded of where I was.  The Oberoi is not situated in a touristy area of Kolkata among other hotels.  Let’s just say there were not many other blond women walking around, or even women for that matter.  But as a New Yorker I walk fast, I’m pretty used to ignoring people, and I knew once I got to the Victoria Memorial I would probably be in a sea of tourists (safety in numbers!).  As I navigated the streets, often stepping over bodies laying across the sidewalk (It was early so I hoped they were just sleeping); I received the usual “hello”, “where are you from”, “where is your husband”, to which I would be polite enough and sport a neutral smile or just give a quick hello back as I walked in N.Y. super-speed to the memorial.  I don’t want to be rude but you really end up having to just ignore everyone. 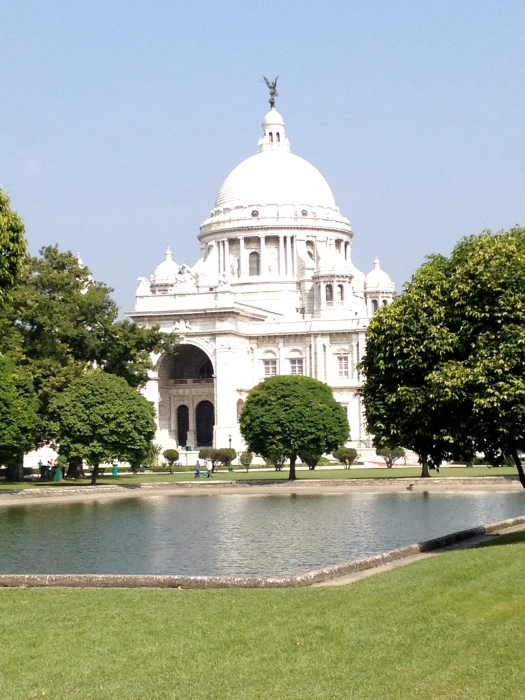 When I got there and paid admission and was so happy to enter the gated park that would surely mean I could have a break from the attention.  But I was wrong.  While there were tons of “tourists” there, they were all Indian nationals.  I had been informed that it was Durga Puja (not that I had any idea what that meant before this trip).  I came to find out that it was a HUGE holiday and people travelled from all over India to be in Kolkata.  And here I was at one of the biggest tourist attractions in the city.

After roaming the pristine grounds, with all eyes on me, I was approached by an Indian man who asked to take my picture.  Although I guess it was polite that he asked, I declined and decided this was my cue to head back to my oasis.

Back at the hotel I decided to call it a day for sightseeing and head to the beautiful pool.  When I got to the pool, I was surprised to see I was the only person there, I guess business men don’t go swimming on their trips.  After confirming the pool wasn’t closed for some strange reason, I ordered a Pellegrino from a waiter dressed in a suit with a napkin draped over his arm.  He brought it on a silver tray, with a fancy glass, accompanied by a fresh slice of lime… he poured some in my cup and stepped back.  Wow, what service!  I took a sip and before I could even swallow completely, my waiter friend stepped forward and refilled my glass.  This happened again with my next sip.  I did a polite, ‘thank you but that’s really not necessary’ when I realized there were four other waiters standing across the pool like statues, with napkins draped over their arm, in the 100+ degree weather.  I now had five people waiting to see if I needed anything.  I am not accustomed to this overkill of service and felt pretty uncomfortable to be honest. Especially when I took a dip in the pool and they all just stood there waiting.  When I got out of the pool I chugged what remained of my Pellegrino and headed up to my room to rest before dinner.

Dinner was an amazing Bengali feast at the hotel (I don’t usually eat at hotels for dinner but the Chef from the breakfast Omelette Bar was very eager to have me try his special food he was serving for Durga Puja).  I am sad to say I did not photograph this meal because it was superb.  There were beautiful prawns, a mint pea soup, and fish curry to name a few.  It was an amazing way to end my first day in Kolkata.

The next day I said good bye to the Oberoi and headed to my next hotel the Fairlawn Hotel.  The Oberoi served it’s purpose, I had a very easy transition into India, but now it was time to move on.  While luxury can be nice, it can also be isolating.  The Fairlawn Hotel was a wonderful spot to stay for my next few days in Kolkata.