On a solo trip to Kolkata a few years back, I was picked up at the airport by a representative from my hotel, cheerfully awaiting my arrival.  She escorted me to the car where the driver was waiting for us.  When we pulled away from the airport she turned back to face me and said (all smiles), “you are most fortunate to be here!” To which I responded, “why thank you! I do feel fortunate”.  I just figured that was her welcome and I was feeling pretty great to have arrived.  It turns out, as she was very ecstatic to tell me, I had arrived just as Durga Puja was starting. “Oh really?” I said, trying to sound excited as if I had any idea what that was. My kind friend then explained that Durga Puja was one of the biggest festivals in West Bengal, and people would be traveling to Kolkata from all over India for the celebration.  Her eyes lit up, “there will be SO MANY people!” Trying not to disappoint her with my distaste for crowds, I attempted to show some enthusiasm, “oh, that’s great…” She continued to explain it was a festival to celebrate a Hindu goddess Durga and the victory of good over evil.  Apparently this Durga lady even killed some demon (she’s basically a Hindu Wonder Woman but cooler). Okay, I thought, I’m listening… “You really must go out at night and visit the pandals and sculptures! It is a most grand event. There are beautiful decorations and lights… it is Kolkata’s biggest celebration!” I was convinced this was a very special event indeed and not to be missed. While venturing out all alone at night into a crowded sea of people was not originally on my itinerary, I vowed to find a way to see the festivities.

At my hotel a few days later, I was connected to a guide who did walking tours and signed myself up.  An Australian ex-pat who lived in the city with his partner, David gave an amazing tour guiding me through streets and back alleys.  I was able to see so much. 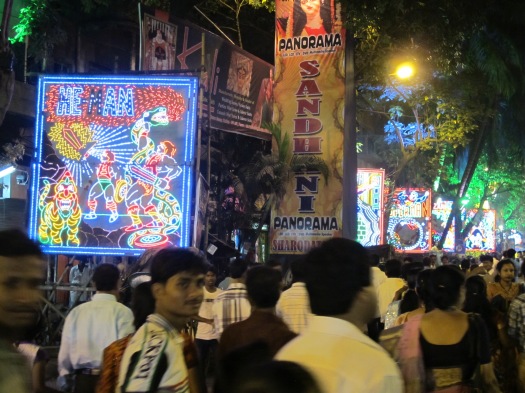 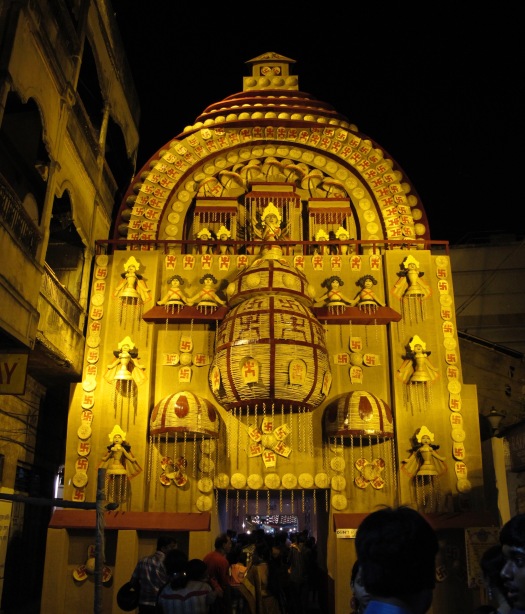 David was a knowledgeable guide and also someone great to talk to about my experiences in Kolkata so far.  I explained that over the past days since I had arrived, I was already feeling the frustration of being a woman alone, exhausted by the constant bombardment of men asking me questions as I walked down the street.  David told me that I should be careful not to put up too many barriers.  I should obviously be safe, first and foremost, but I needed learn to relax a little and bring the walls down a bit.  For the most part, David explained, these people are harmless and just very curious.  His words stayed with me and the next morning I decided to engage in a conversation with the next person who approached me as long as they appeared to be harmless and ‘just curious’.  The outcome turned out to be a delightful adventure.