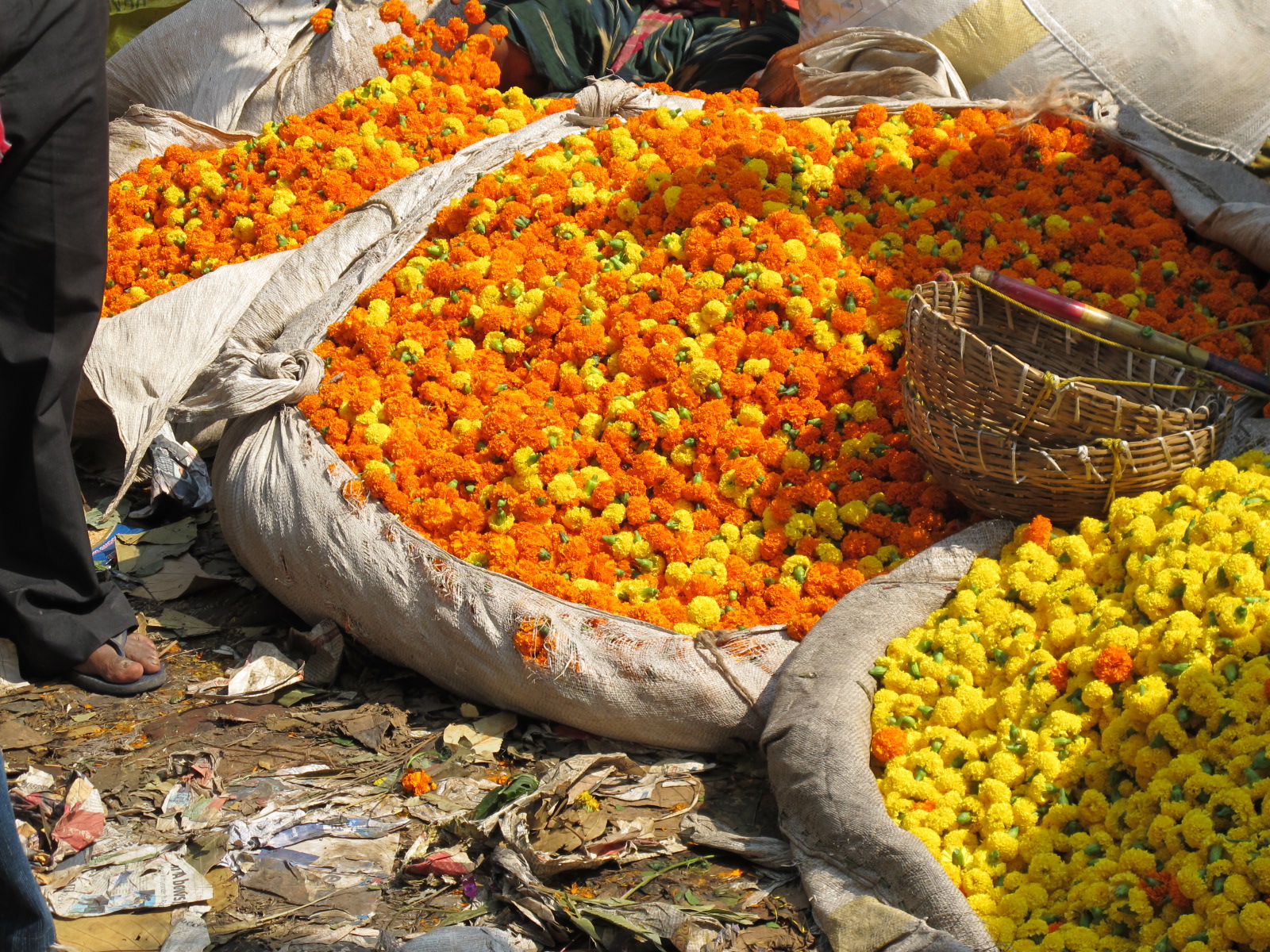 On a trip in India years ago, on one of my final days in Kolkata, I had only one thing left I wanted to accomplish. That was to check out the flower market.  The evening before I had decided that if someone tried to talk to me, I would make an attempt to be open minded if I was approached in a harmless, non aggressive, and ‘I’m not going to kidnap you’ way… as long as I felt comfortable.  I had been given advice (a.k.a. lectured) by an Aussie ex-pat who was my walking guide for Durga Puja the night before.  While getting approached by so many men made them come off as aggressive and creepy, there were some that honestly just had a curiosity about a yellow haired lady walking around by herself.  “Kolkata”, the Aussie had said, “is a different kind of city… The people are very educated and just tend to be interested in learning about foreigners.”

I walked out of the Fairlawn hotel and immediately was approached by a young man, well dressed in a button down shirt walking with his friend.  “Hello, where are you from?”  I responded that I was visiting from New York.  *Disclaimer here: I always tend to say I am from New York, rather than the United States.  I am proud to be a New Yorker, but not always so proud to be an American.  I’m sure this will get some backlash (shame on you!),  but it is getting harder and harder to admit you are an American overseas.  In my mind New York is in it’s own bubble in the U.S. and we are a global city that most people love.

My new friend and I started to chat and he mentioned that he was on his way to the flower market (his friend was off to work).  Wait a minute…  Did this guy somehow know I was headed there?  Was this part of the scheme to abduct me?  Should I run away screaming?!  He seemed harmless and our conversation thus far down the street from the hotel had been very pleasant; so I said I was headed that way too and we could walk together.  Also, the plus side of walking with a local is that everyone else leaves you alone.  Jackpot!

My friend’s name was Arnab which he said meant the sea.  He asked me about my travels in India.  I told Arnab that I was here to accompany my husband (a lie), who was traveling for work (another lie).  My ‘husband’ was resting in our room (so many lies).  *Another disclaimer – I was single at the time but I always travel with a ring on my ring finger.  And I’m always ‘married’.  And in this case my husband was in the room resting before our afternoon flight.

It definitely is weird to lie to people-I am someone you will always beat in poker because I am absolutely the worst at bluffing.  It’s as if I walk around with a lie detector strapped to my wrist just waiting to blurt out the truth…I just can’t handle it!  But in India I had a little fun making up my husbands along the way, just to make sure everyone understood I was off-limits.

Arnab: “What does your husband do for a job?”

Me: “He’s a teacher, a professor actually, at a university.  Literature.”

Arnab: “Does he not have classes this time of year?” (It was the end of October)

Me: “Oh… He’s taking the semester off, to work on his thesis…  And he’s here to give lectures.”

Arnab: “How wonderful… How many children do you have?”

Me: “Well, none…not yet (I knew lying about children would give me away for sure!)”

Arnab told me he had a girlfriend in Holland and he wanted to move there.  He said for now he was trying to get work in the tourism industry and just gave tours on the side till he got established.  As we walked I felt happy I was able to engage in this conversation, plus have a personal resource to explain all the buildings and areas we passed.

We passed the Cricket Association:

Howrah Bridge:  I learned that you are not allowed to take pictures on the bridge (Arnab explained that alarmingly after I got a few shots):

The flower market was fascinating and I always enjoy visiting places where you see people busy going about their lives.  Having seen so many flowers displayed on the shrines it was an interesting behind the scenes look.  It’s not like a flower market in Paris or New York where you see people buying fabulous bouquets to display in their upscale homes. 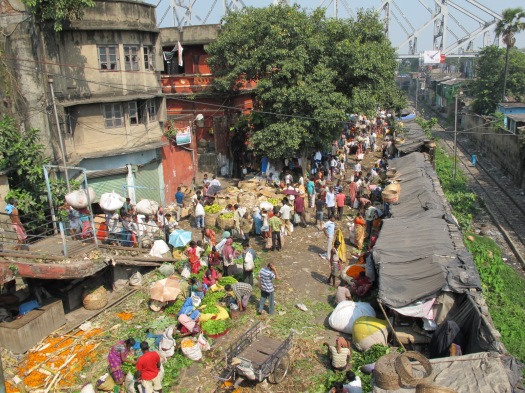 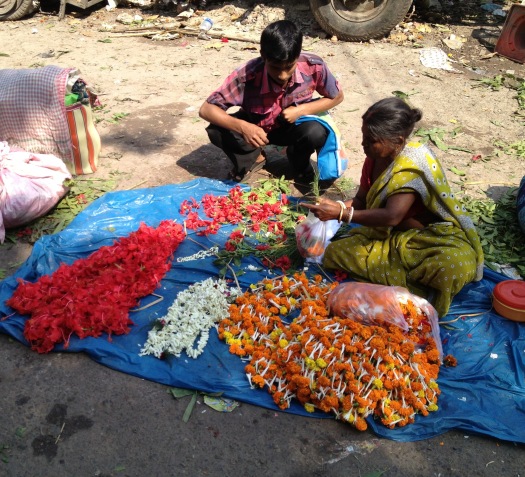 Under those piles of flowers was the gritty Kolkata street and this was a place of sweat, hard work, and serious business exchanges. 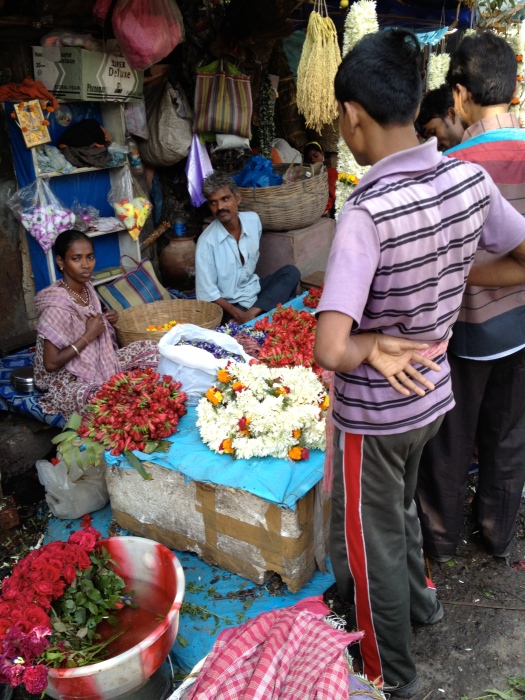 After the flower market Arnab invited me to go to his friend’s shop for tea.  I declined reminding him that my pretend husband would be waiting for me (my pretend husband gets so mad when I am late!).  Arnab gave me a business card and we parted ways as I headed back to the hotel.

This was a positive experience and as someone who is always incredibly guarded it felt nice to put my walls down while still keeping the boundaries (with the help of my web of lies and my over protective fake husband).  While this was a nice experience chatting with a local, I want to be clear that you need to always trust your gut, and most of all be careful.  In a place like Kolkata with less tourists visiting, the Aussie guide was right, there are many people who are just curious.  But in every city, Kolkata and beyond, there are the harmless people and there are the people that are the reason everyone says “be careful”…  Even in New York. 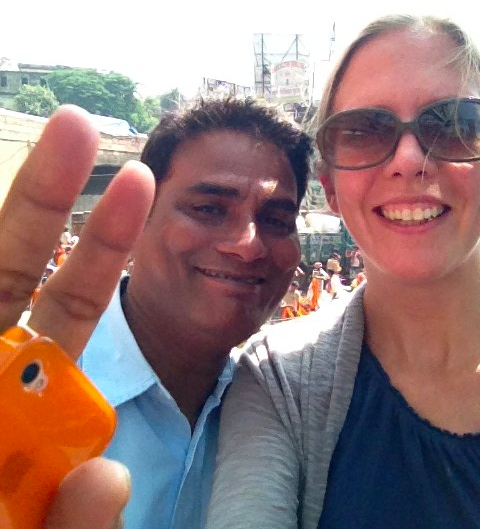 One Reply to “The Kolkata Flower Market”