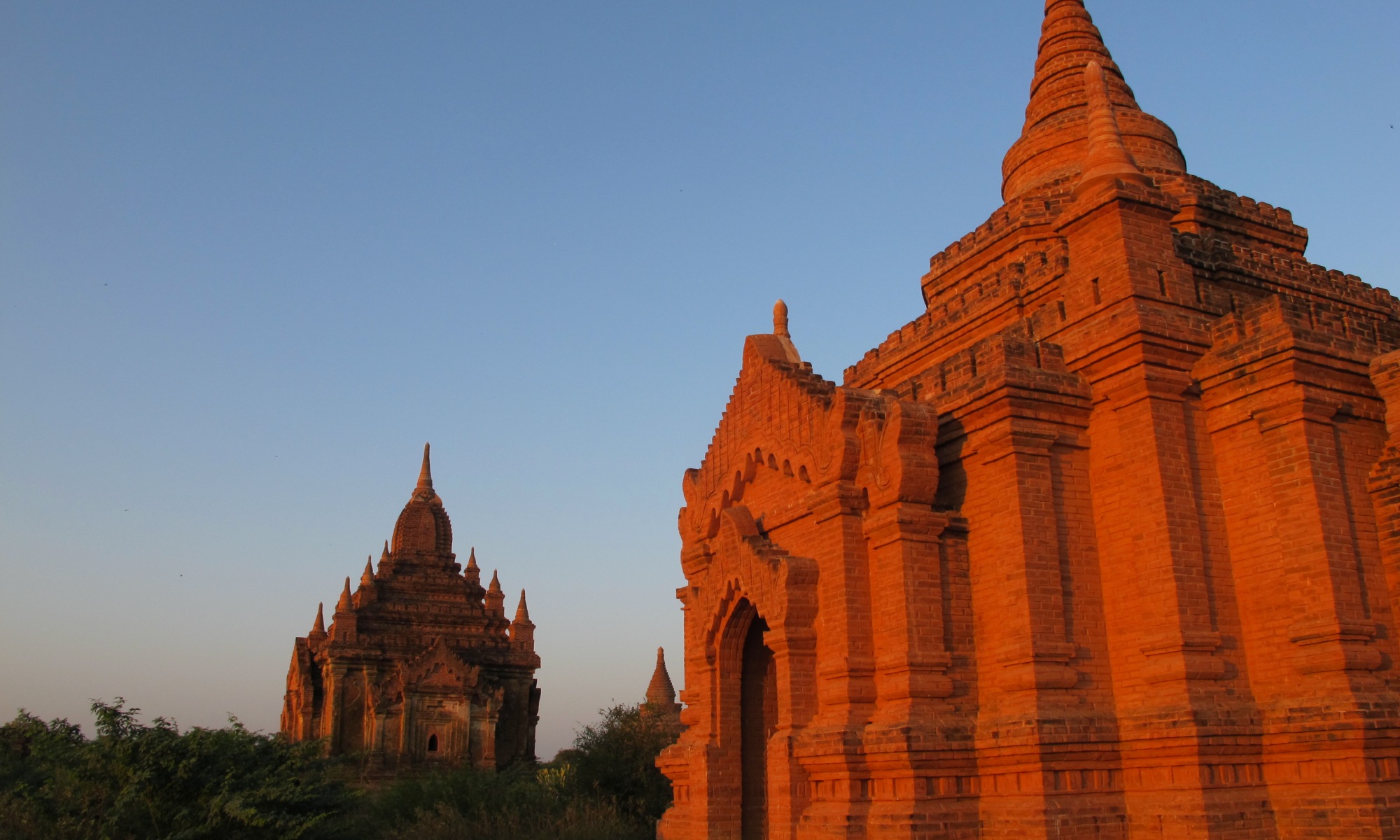 Earlier this year I spent a few weeks with my husband exploring a truly wonderful country, Myanmar.  Bagan is a must if you go to Myanmar, and we were very excited when we arrived there, following a 7 hour river boat ride from Mandalay.  Bagan is known for the beautiful temples scattered all over, making for some alluring scenery.  Earthquakes and time have taken their toll on the area, originally there were over 10,000 temples, now there are around 2,000, the majority of which have been restored. 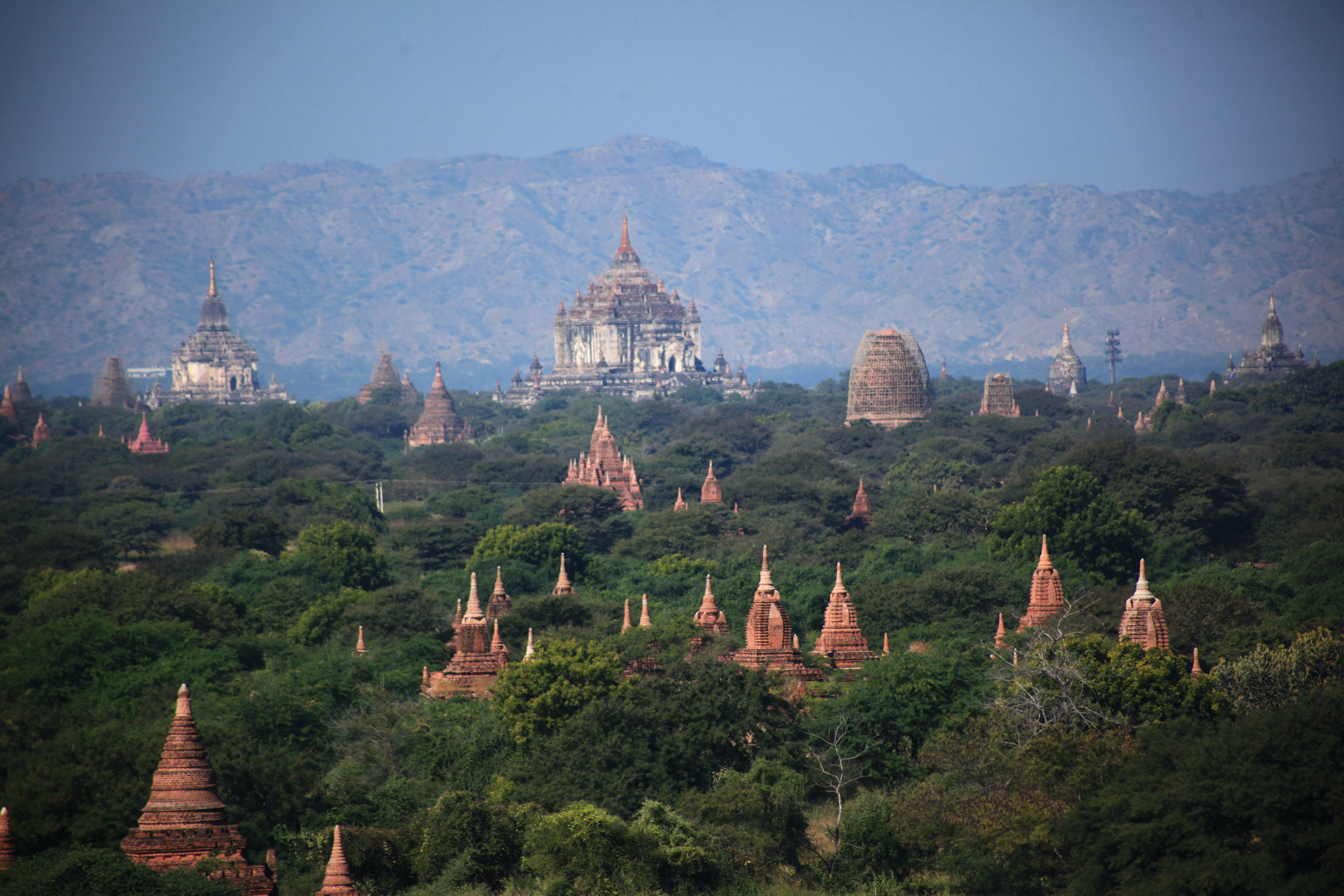 Prior to our trip I had heard some complaints about Bagan being touristy and ‘not so great’.  Someone tried to relate their visit to Bagan with Angkor Wat and said it doesn’t compare.  That was a strange comparison as they are completely different types of temples, of different people, in different countries.  I have been to Angkor Wat and can tell you the two are very different, but both are wonderful in their own way.  For now, let’s focus on Bagan.

Bagan was touristy but to be honest you could hardly tell.  There are quite literally so many temples, it spreads the people out.  You don’t pay an entrance fee, the temples and shrines are all open and you can travel freely to each one.  We rented ‘E-Bikes’ and rode around on our own.  The freedom of just wandering and exploring was a really nice feature. 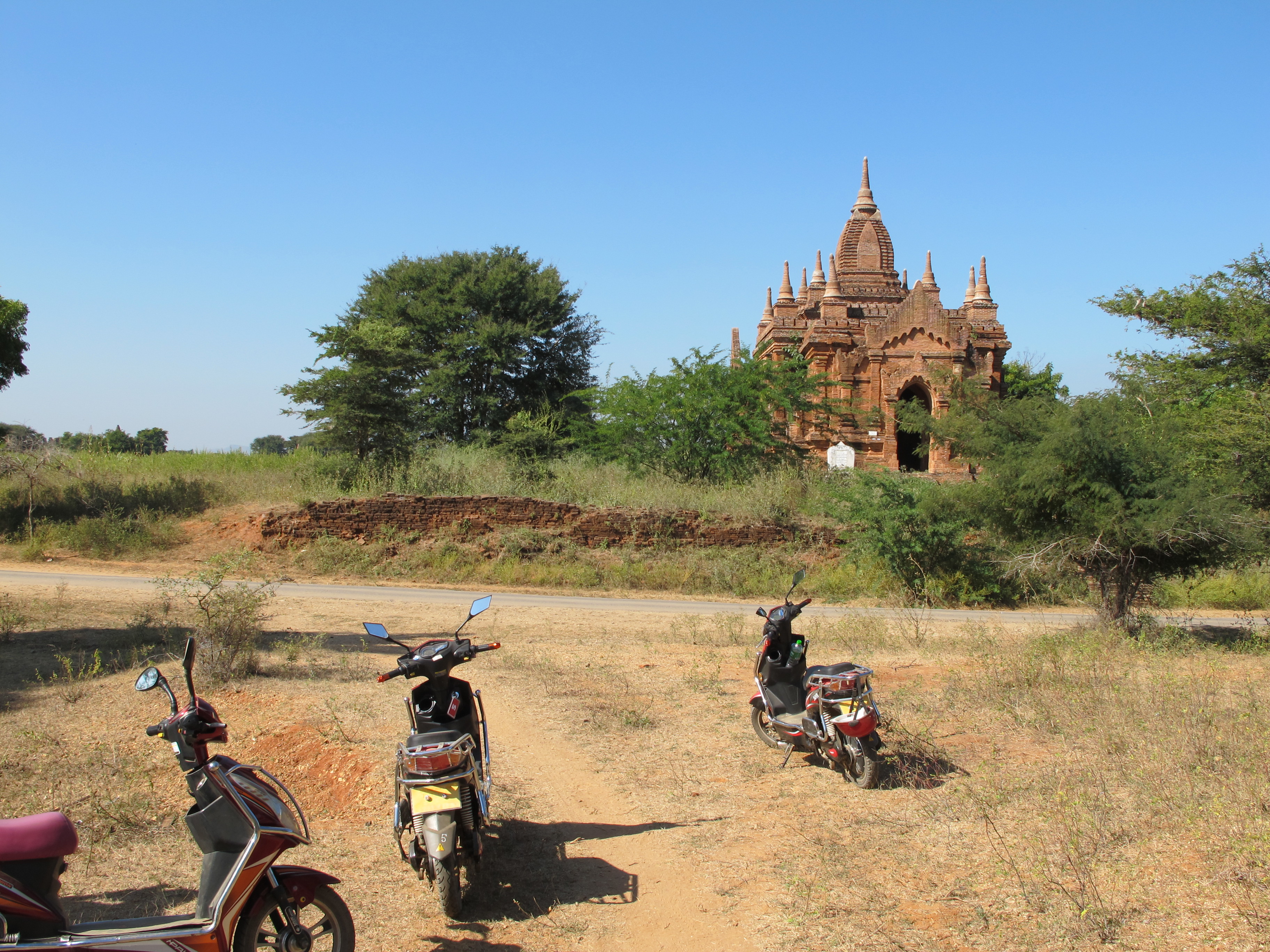 In addition to the gorgeous surroundings we had some very noteworthy meals.  In Mandalay we had already started out loving the food in Myanmar and were very excited to continue on our delicious path.  When I travel I love trying as much authentic food as possible and sitting down to a meal is one of my favorite parts of a trip. On our river boat ride from Mandalay, we had heard about an Italian restaurant from some Dutch people we met.  I internally rolled my eyes – Italian food in Myanmar?  That sounds like a disaster.  I recall many menus all over Asia offering spaghetti with ketchup.  No thanks.  The two Dutch men (who also happened to be at our hotel) mentioned they were going because they wanted wine.  Wine did sound good. I love the food in Myanmar but I had to admit I did miss enjoying a nice glass of wine.   Also, as a New Yorker, after about a week without any pizza, pasta, or cheese, the  withdrawal of Italian food starts to wear on my system and I’m convinced influences my brain chemistry.  I have dreams about ravioli, fantasize about my favorite pizza spots.  I love Asian food, and was really enjoying the food in Myanmar, but I think you can guess my favorite cuisine.

That first night in Bagan, my husband and I ate at our hotel.  Our hotel was a bit out of the way from town and according to the front desk there was apparently a wait for a taxi, and they said the spot we wanted to go to was “too far away”.  We later realized their discouragement was probably a strategy to get us to eat in the restaurant.  It did have a nice deck outside so we figured we would just relax and enjoy dinner there.  In Mandalay my husband had an amazing dish, a black bean pork curry, a specialty in Myanmar, and we were hoping it would be on the menu. 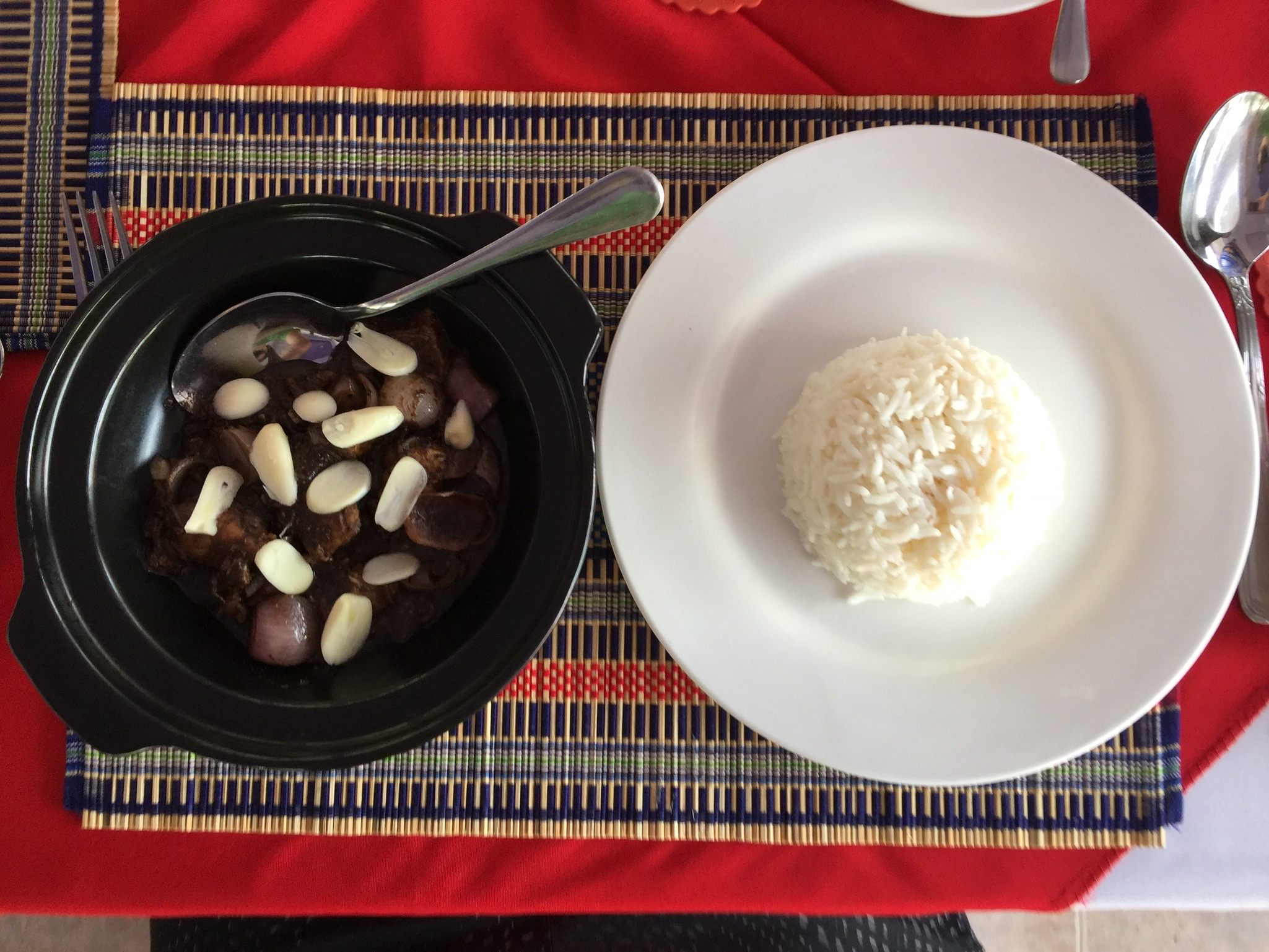 Tasty pork with black bean curry in Mandalay at the Triumph Hotel.

We sat in the empty restaurant, where the only one other table was occupied with what appeared to be the boss, a Chinese woman (this was a Chinese run hotel) who was sitting going over paperwork.  When the waiter sat us, after we ordered drinks, he just stood there not moving while we looked at the menu.  “We can just have our drinks to start…” hinted my husband politely to get him out of our hair.  He came back with our Myanmar beers and we were very excited to order as we saw the delicious pork specialty my husband was craving.  I ordered a spicy noodle soup (my close second favorite food is any type of spicy noodle soup) and when my husband ordered his dish the waiter hesitated.  He rubbed his forehead and looked nervously at the Chinese boss woman and said,  “Um, this dish is no good.”  He was having trouble with his English, which is completely fine by us, we just wanted to get to the bottom of what was ‘no good’.  I chimed in, “Are you saying you are out of this?”  He said he needed to check something.  He went to the kitchen and came back.  “Yes, we have one more.”  To this the Chinese lady came over and they spoke to each other in Burmese.  You could tell she was annoyed and he was nervous.  They stopped speaking and she turned to us, “This dish takes very long.  You should pick something else.”  It was still early and we were on vacation, and we were also curious what ‘so long was’.  My husband asked and she said “At least one hour”, as if she was trying to scare us.  My husband and I said we were in no rush at all, and he still wanted it, so we ordered an avocado salad appetizer to tide us over.  The Chinese woman was frustrated but seemed to allow the waiter to take the order and she went back to her table to continue her work.

My husband and I were a little thrown off. What was that about?  It was still early and a bus of Chinese tourists had just pulled into the hotel and they were filtering into the restaurant, so it was not like they were trying to close anytime soon.  Whatever just happened didn’t matter, my husband would get his yummy meal and we were happy to enjoy our drinks.  Literally ten minutes later the waiter comes out with a huge tray.  On the table he puts our avocado salad, my spicy noodle soup, AND the pork dish.  We looked at the waiter a bit surprised.  I blurt out, “I thought this was going to take an hour.”  The waiter was trying to understand my question and all I could notice was the Chinese woman avoiding us.  Perhaps she was trying to sway us from eating that because it was the last one and she wanted it for dinner.  It was mediocre at best and all together a bizarre experience that left a bad taste in our mouths.

The next morning at breakfast we ran into the Dutch guys.  They immediately started RAVING about the Italian spot and they said it was owned and run by a woman from Italy and her Swiss husband.  Everything was made from scratch and they said it was amazing.  I asked them how far it was because the restaurant we were attempting to get to the night before was on the same street.  I told them how the front desk practically refused to call a taxi because it was so far.  They looked at each other and laughed.  “About a 10-15 minute drive.”  It cost apparently the same as seven U.S. dollars.  It’s worth mentioning that we stayed at the Kumudara Hotel, and if you were to read reviews they are all similar.  Old dated hotel, unfriendly staff, BUT it’s the only hotel with views of the ruins.  So it’s a bit of a toss up.

The point of this post was not just to complain about our hotel but also to say we had some AMAZING meals in Bagan.  That next day we actually went to the Italian restaurant, La Terrazza with the Dutch guys for lunch (they could not wait to go back).  I felt guilty eating Italian food in Myanmar but it was delicious! 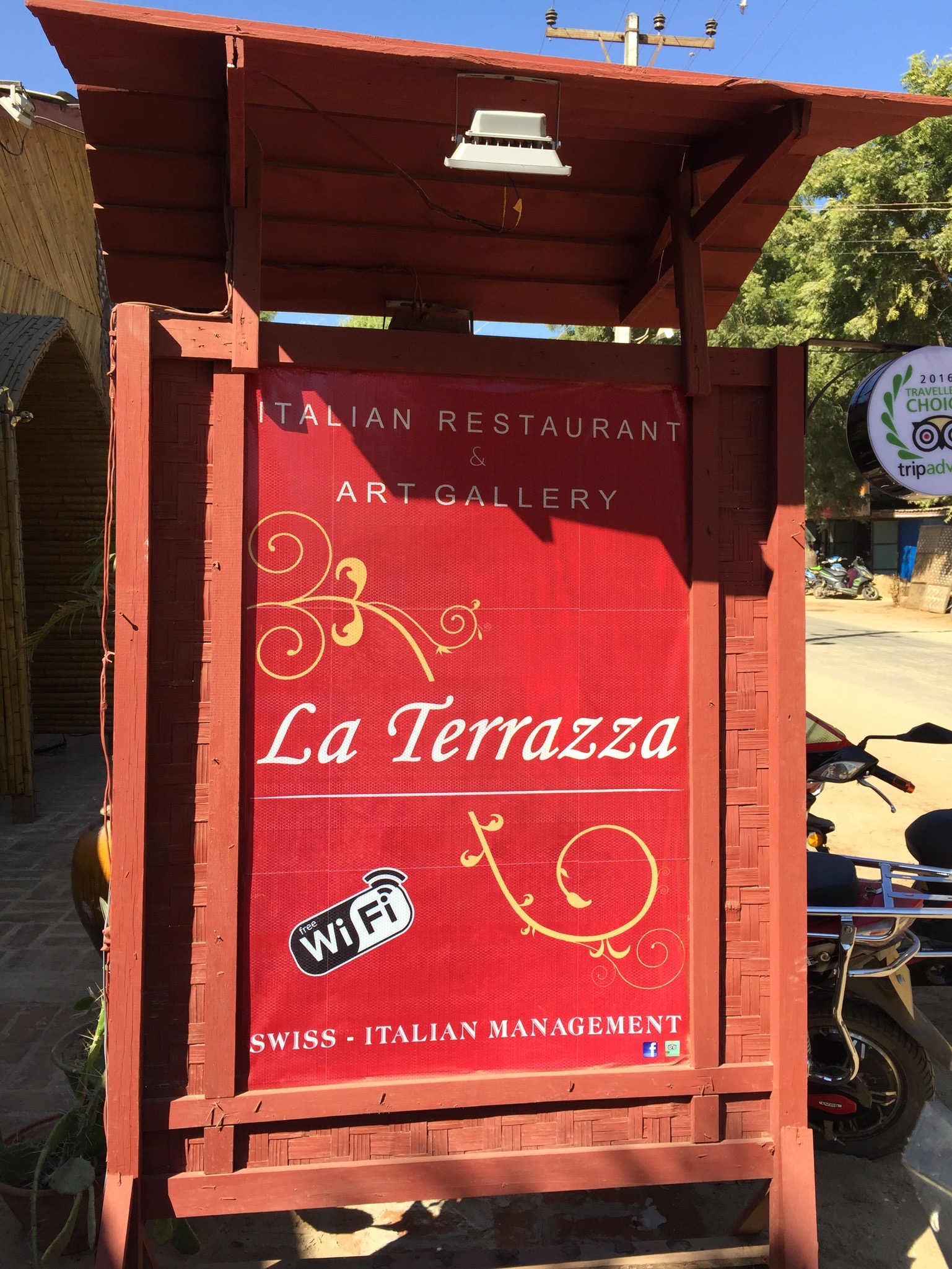 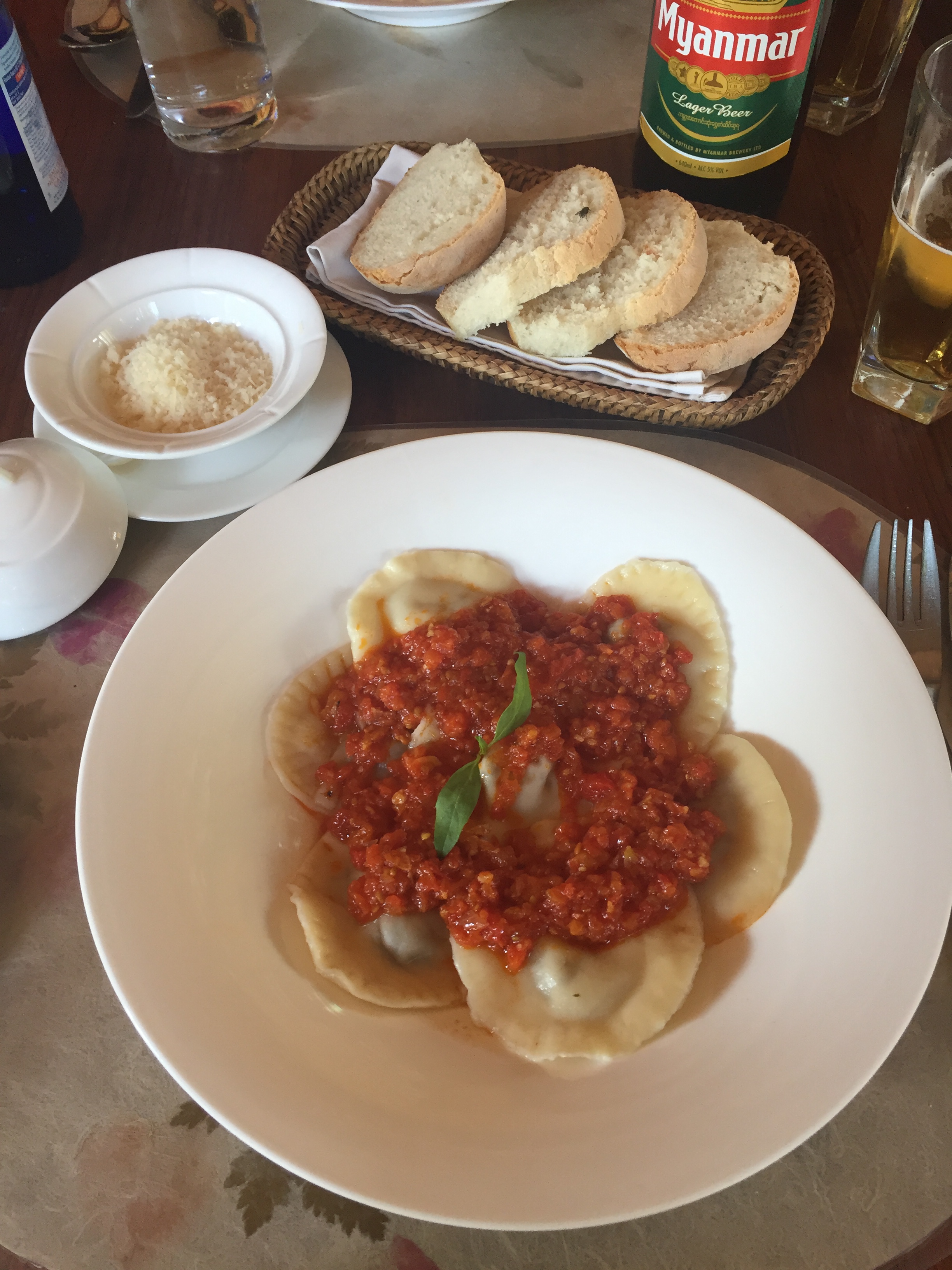 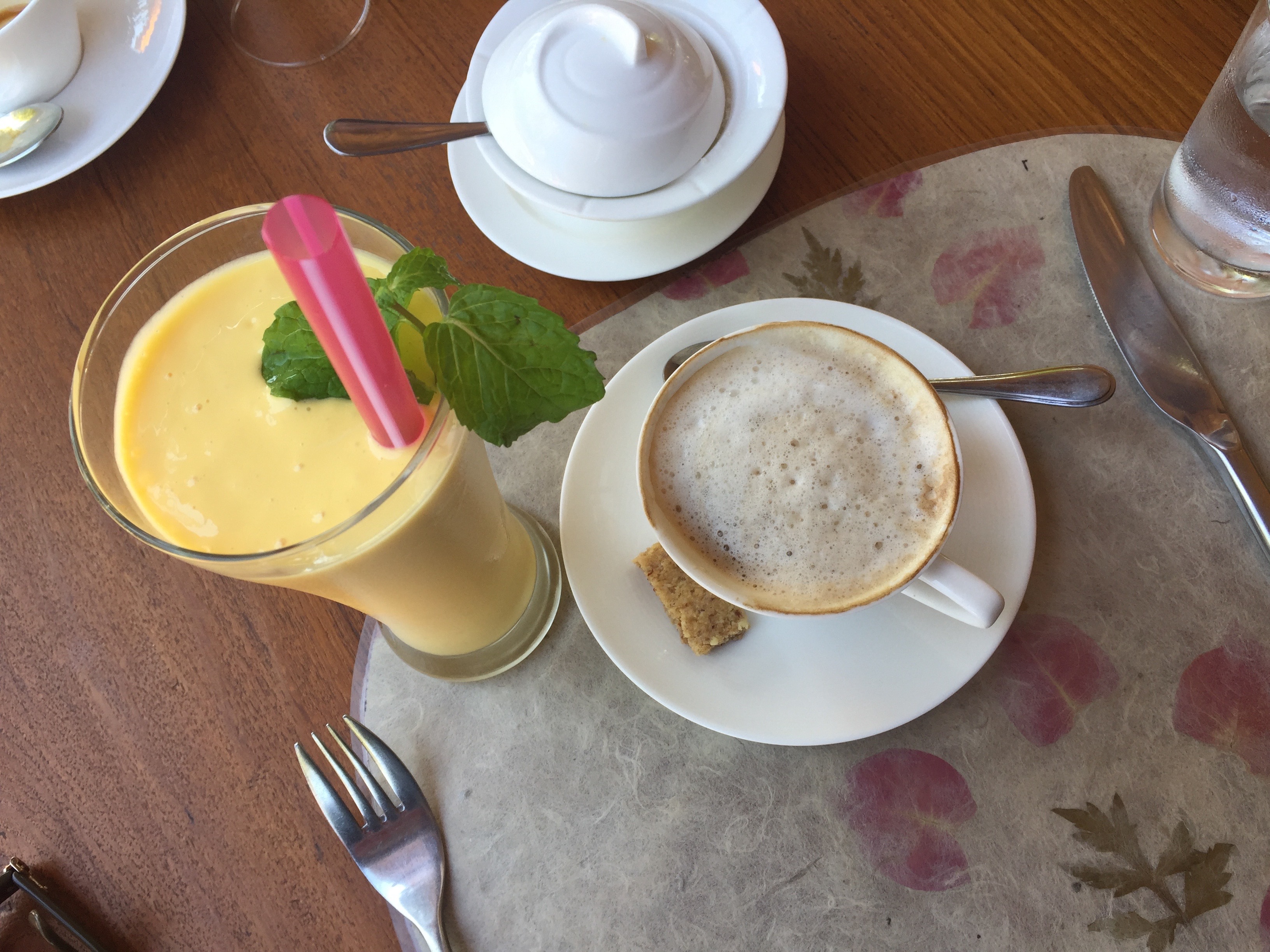 That night for dinner my husband and I shamefully agreed to go BACK again.  We thought it would be nice to have a bottle of wine…And pizza. 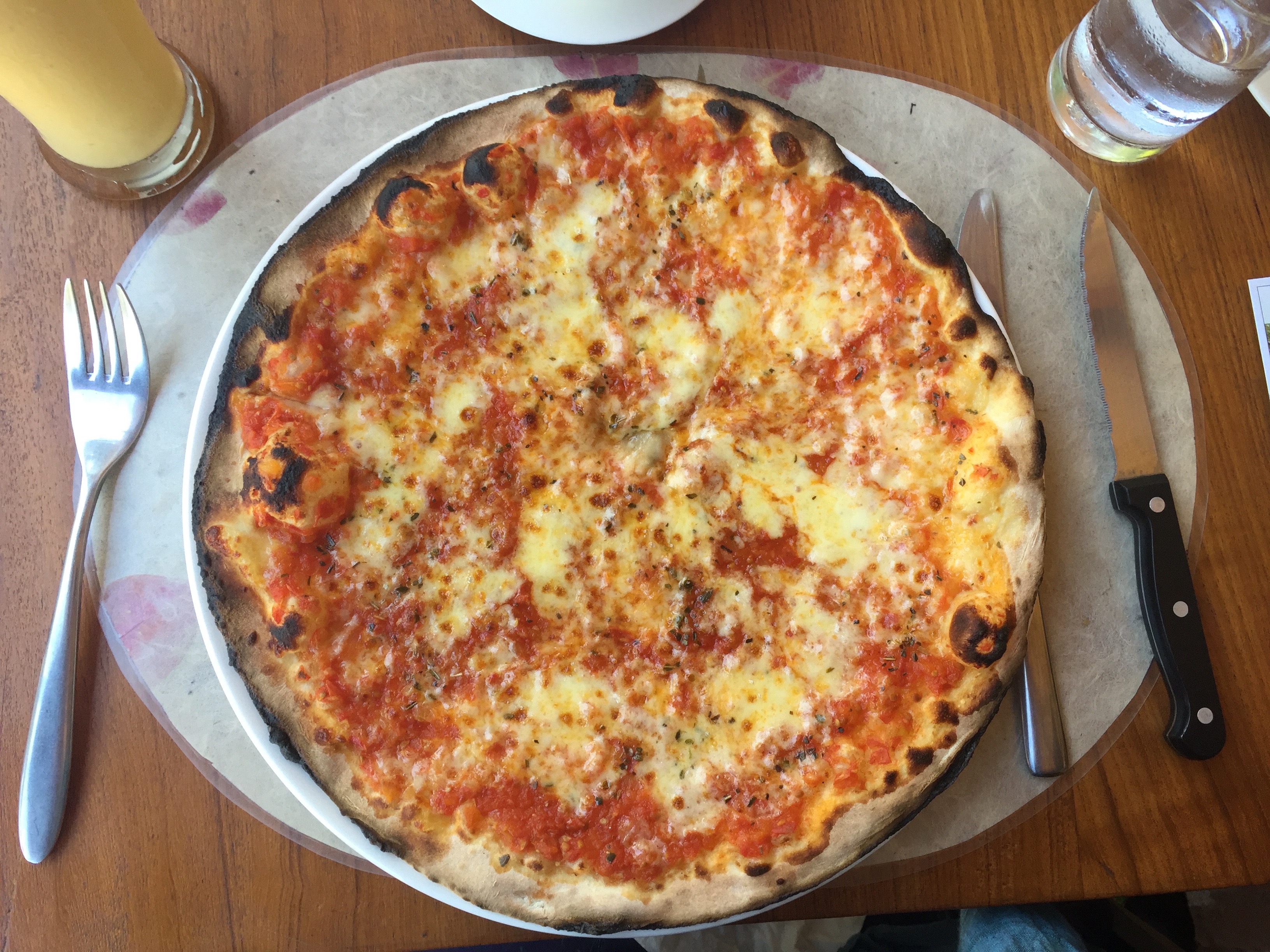 We were in Bagan for three full days and like a bunch of addicts went back for lunch every day.  We figured we had a few more weeks in Myanmar and we might as well get our fix of Italian food while we could.  We had some other amazing meals worth mentioning as well.  One restaurant we will never forget is Sanon.  Sanon hires orphans and trains them in the high end service industry.  The manager Richard gave us a tour of the kitchen and passionately talked about how they have helped so many youths.  They are trained as waitstaff and as cooks; it’s a wonderful organization and the food was phenomenal.  The menu is tapas style with creative twists on traditional meals.  Absolutely a must try (we actually went twice because there were so many things we wanted to try the first night we decided we had to go back)!

So rest assured that when you are in Bagan there are lots of good options to feed yourself.  Visiting temples builds up an appetite and there is no shortage of great meals and some spots worthy of eating several meals at! 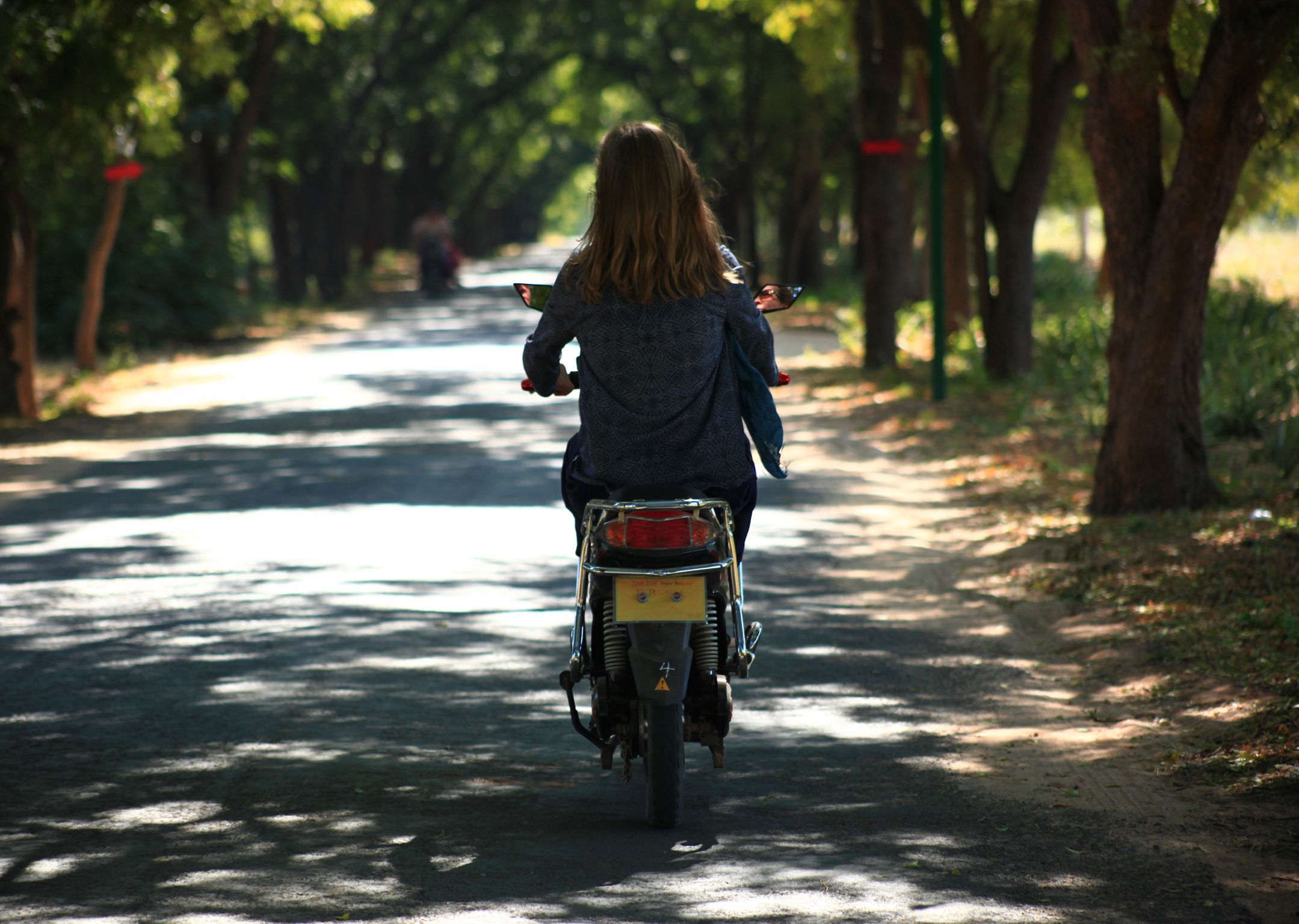 Select photos courtesy of my hubby.